Last week, we talked about identifying with Jesus and joining the mission of the church.  This week, we are going to uncover what it means to take up our cross and follow Jesus.  Put Jesus First, put yourself last.  Following Jesus requires a total denial of yourself and your interests.  What we see right from the start of these verses is almost a sigh of relief from Jesus that his disciples have finally “got it".  So he begins to instruct them on how the upcoming events are going to go.  And as soon as he begins laying it out for them, Peter jumps in, misses the most important part, and tries to take action.

1) Putting Jesus first means God’s voice should be stronger than our personal narrative.  The disciples were finally starting to “get it.” They were hearing Jesus talk about the Kingdom, his reign, and a defeat of all enemies and they interpreted what he was saying because they only saw as current and not foretelling.  This is why Jesus was constantly telling them to remain silent. He was concerned that the more people who knew who he was, the more violence would take place because people would be trying to “Pull a Peter” and cut the ears off their oppressors.  Jesus was coming as a peaceful Messiah and not a conquering king.  He was not trying to incite a rebellion.  Unfortunately, the disciples, particularly Peter, did not listen to Jesus’ full statement. He only heard the part about death and suffering and not the fairly important piece of him resurrecting.

We cannot pick and choose what to hear, read, listen to in God’s Word. We must obey all of it or none of it.  And its not that Peter wasn’t obeying Jesus’ instruction. In fact, I love Peter’s heart here because he goes into defense mode.  Peter is one of my favorite Bible characters. I love his audacity, his charisma, his bravery, his boldness, and the fact that he is like a golden retriever in almost every engagement we see him in with Jesus.  Jesus is walking on water? Cool, me too.  These guys are trying to arrest my Lord? Hope your servant listens well with both ears because he is about to lose one.  Jesus washing my feet because he is my servant? Hogwash, let me wash yours Lord. Oh wait, you’re trying to teach me a lesson in humility and servant leadership? *Disrobes* WASH MY ENTIRE BODY!  As the rest of the disciples look on quizzically, they know after the first or second time, they can let Peter test the waters and get rebuked. He is the OG guinea pig!

This scene is no different – Jesus is explaining that he will suffer and die and while the other disciples are scratching their heads trying to figure out the parable or maybe just too afraid to speak up and say, “Lord, we will not let that happen!” Peter jumps in and REPRIMANDS him.  If Peter knows Jesus is who he says he is, he knows he is reprimanding God.  The audacity!  But Peter still doesn’t get it.  He still misses it.  When we are obeying God’s Word our response must be to then submit and follow and not try to offer our own opinions/interpretations. Listen first, then ask questions.

2) Putting Jesus first means submitting to God’s plan for your life.  It is here we see the Great Rebuke: “Get behind me Satan!”  It is easy to judge not only Peter’s actions here but Jesus’ tone.  Most of my life, I considered this to be a snarl of anger but that’s not what would be consistent with Jesus’ character.  Instead we see a sharp and severe response that is marked by grief, a wounded heart, and terror at what is to come.  Peter was one of Jesus’ three closest friends and in this moment we see Peter missing who Jesus is, despite how many times he has shown them and told them, and he tries to stand in the way of God’s will.  He goes from being named the Rock that Jesus will build the church on to minutes later being a stumbling block to Jesus.

In Luke 4:13, after the temptation of Jesus, we see Satan departs from him until the opportune time.  Here is the opportune time.  We can only imagine the exhaustion Jesus was facing from all of the preaching, miracles, answering questions, and bearing of souls who were flat out rejecting him.  He is sensing weakness in his spirit again and instead of Satan directly tempting him to choose another path as he did in the initial temptations, he is using one of Jesus’ closest friends.  Quote: “Satan is any influence which seeks to turn us away from the hard way that God has set before us.” -William Barclay.

What really wounded Jesus’ heart and caused this response was that the tempter spoke to him through the mistaken and misguided love of Peter’s hot heart.  The beauty of this moment was this: In the account of Jesus’ temptation, he says, “Begone Satan!” and banishes his enemy from his presence. In this encounter, he says, “Begone BEHIND me!”  By doing this, Jesus is reminding Peter of his place in this story which is behind Jesus.   There is ALWAYS the challenge and the chance for us to become a follower again when we fail, make mistakes, and sin.  The basic difference between Peter and Satan is precisely that Satan would never willingly get behind Jesus.  So long as we are prepared to TRY and follow, even after we’ve fallen, there is still hope of glory here and after for us.  We could honestly stop there but we would miss the most beautiful part of this story.  Peter wasn’t intentionally trying to cause Jesus to stumble. He was trying to save Jesus from inevitable horrific death.  But Peter was still missing the most important part of Jesus’ mission and Jesus was about to lay it out plain and simple.

3) Putting ourselves last means being more concerned with others than yourself.  What does being more concerned with others look like? Jesus gives us three steps and they involve denying ourselves, picking up our personalized instrument of torture and suffering, and following Jesus.  Now you might hear that and think, “Geez Robbie, that’s a lot less encouraging than what you said about there being hope after we fail.”  And maybe it is.  But we cannot just get behind Jesus. We must fall in line and then surrender everything we have to him.  He doesn’t just ask us to follow him. He asks us to deny ourselves, take up our own cross, and then follow him.  The Christian life is one that always and daily more concerned with others than itself.  Practically, to live this out, these three steps start simple and then progressively more difficult.

1.  Deny yourself equals don’t be selfish.  Our sin is rooted in selfishness.  We think and believe that the paths and plans we have for our own life are better than the paths and plans Jesus has for our lives.  Ask God this morning to reveal the ways you have been selfish and begin the practice of daily denying yourself.  A life of constant self-denial is a life of constant concession to God.

2. Take up your cross.  This may be an oversimplification, but this does not mean pick up the gold or silver cross necklace on your nightstand and put it on tomorrow morning.  The cross is one of the most horrific forms of execution that humanity has come up with. Every element of it was designed for maximum pain and suffering.  It was a burden of sacrifice.  Although all the disciples except for John were martyred (Peter and Andrew were crucified), taking up your cross does not necessarily mean being martyred for your faith, although it might.  What it does mean practically, is that we might have to abandon our personal ambition to follow Jesus.  In what ways is your personal ambition getting in the way of you devoting your life to Jesus?

3. Finally, we follow Jesus.  In verse 25, Jesus makes an important statement about the danger of hanging on to your life: You will lose it. If you give up your life for Jesus’ sake, you will save it.  If we are hanging onto our lives, we are living in such a way as the man who hid his talents in the sand or the saver who stuffs his cash in a mattress.  There is no risk and where there is no risk, there is no reward.  We are living in a culture where it is growing increasingly more difficult to not just submit to but also to stand for the teachings of Jesus and God’s word.  My youth pastor used to say, “If you don’t live for something, you will die for nothing.”  We must be living for Jesus and not simply just existing.  I am guilty of doing this in my own life.  I will often stay silent on issues that I know are wrong because I am too afraid to speak up for fear of getting cancelled or whatever else could happen to me.  This is a coward’s way to live.  We will speak up about who we vote for in politics and cheer for in sports but we won’t speak up about our faith.  Jesus paints a very clear warning here that the people who play this game of life safely will lose their life.  I talk to the students almost weekly about the importance of not caring what the world thinks and instead following and submitting to Jesus because his opinion of us is all that matters when all of this comes to an end.  What does is benefit us to gain the whole world but lost our souls?  It doesn’t.

A few years ago, David Platt wrote a book called “Radical”.  The tagline of the book is “Taking back your faith from the American dream” but I would like to take it a step further and say following Jesus radically is taking back your faith from your dreams.  Following Jesus means it is not about you.  In the game of follow the leader, there was inevitably one or two “followers” who would veer off from the rules of the leader.  Everyone else, submitted to whatever the leader was doing.  Regardless of what motion they wanted to make or direction they wanted to take, they submitted to what the leader was doing.  This is how we must submit to our leader, Jesus. Mimic his motions and words and actions. Attempt to be like him. Die to ourselves and take up our cross.  The fate of our souls depends on it. 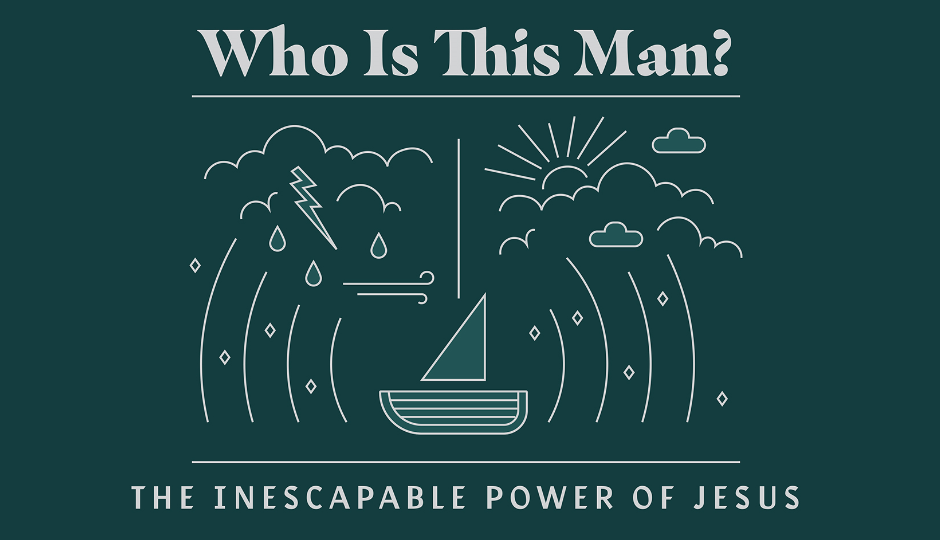 Who Is This Man? The Inescapable Power of Jesus is a series that examines aspects of Jesus’s character. His character is revealed by his interactions with his disciples, with those who need healing, and even with children. In these interactions, Jesus shows that his heart is for all people, even (perhaps especially) those outside the traditional community. Through words difficult and caring, Jesus declares that his people should trust in him and participate in his work, for the sake of their neighbors. 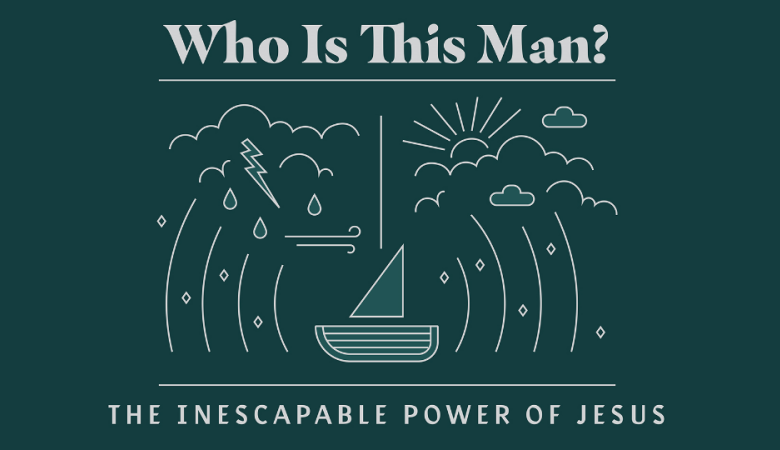 Matthew 14:20 And they all ate and were satisfied. And they took up...

A Heart of Holiness

Matthew 16:12 Then they understood that he did not tell them to beware...

Matthew 17:5 ESV He was still speaking when, behold, a bright cloud...